Bartonella is a type of bacteria that can infect humans as well as other mammals, including horses and donkeys.

The resulting infection, known as bartonellosis, has been documented in many regions throughout the world. Researchers are now learning that it may be a common misdiagnosed or undiagnosed problem in horses.

This bacterial infection can cause a wide range of symptoms and contribute to chronic health concerns. It can lead to inflammation and a worsening of other conditions, such as arthritis, respiratory problems and vascular issues.

An Italian study revealed that over half of the asymptomatic equines (77 horses and 15 donkeys) in their study group tested positive for Bartonella antibodies. This suggests widespread exposure to the bacteria, although not all infections produce symptoms.

The researchers from this study recommend that horses and donkeys with conditions such as vasculitis, arthropathy, hepatitis, lymphadenopathy and reproductive disorders be examined for bartonellosis. [11]

The genus Bartonella is made up of at least 34 different species of bacteria. Among these species, 14 have been found to cause zoonotic disease (diseases that can be passed from animals to humans). [1]

In humans, the most commonly known form of Bartonella infection is cat scratch fever (caused by Bartonella henselae). As the name implies, this infection is transmitted when a cat carrying B. henselae scratches a person.

Infection usually starts with a rash followed by symptoms such as low-grade fever, headache, sore throat, and conjunctivitis. These symptoms are usually not life-threatening and often resolve without treatment.

The first cases of Bartonella infection in horses were reported in a 2008 study that examined two horses in North Carolina. The horses presented with different symptoms, but testing confirmed the presence of Bartonella. [2]

How Bartonella is Transmitted

It is believed that Bartonella bacteria are transmitted to horses by biting insects such as flies, mosquitoes, fleas, and possibly ticks. The incidence of infection is higher in warmer areas of the world that are more hospitable to these insects.

Bartonella can also be transmitted to horses through bites, wounds, or scratches contaminated by arthropod feces or possibly needle sticks. [2] Studies suggest that this bacteria may also be passed from mother to foal. [5]

New evidence also suggests that B. henselae may co-infect people and animals with other vector-borne diseases, including Borrelia burgdorferi, the most common pathogen associated with Lyme disease. [10]

Bartonella bacteria are highly adaptive and are also unique because they affect the blood and lymphatic vessels in mammals.

Once Bartonella has been transmitted, the bacteria enter the bloodstream, circulate through the smallest blood vessels, and take up residence in the micro-capillaries within different tissues throughout the body. [6]

Researchers have found a link between B. henselae infection and inflammatory vascular disease. However, different symptoms can arise depending on the type of infecting Bartonella species and, likely, the state of the animal or person’s immune system.

If a horse has a preexisting condition such as arthritis, the bacteria will take advantage of the inflammatory process already underway and cause infection in the joints.

The weaker or more compromised an animal’s immune system is, the more likely it will develop a chronic condition of bartonellosis. [7]

Bartonella causes a cytokine cascade in the horse’s body. Cytokines are small molecules released by cells of the immune system. These molecules are important for communication between cells.

It is these cytokines that produce many of the symptoms a horse experiences when they are ill. [7]

Horses and donkeys may not show signs of bartonellosis until the infection has spread to multiple parts of the body. It’s also possible that they will show no symptoms at all.

With that said, unexplained shortened stride length may be one of the first symptoms noticed with Bartonella infection. This is attributed to the large bundle of blood vessels that lie beneath the shoulder and in the groin area of the horse.

The list of other reported symptoms for equine bartonellosis is quite long and can range from mild to severe. These symptoms may include: [6]

This infection can also contribute to gut issues including:

Many of these symptoms occur on a chronic basis. Horses being treated for chronic conditions may have an underlying Bartonella infection.

In one study, horses that tested positive for Bartonella infection had a history of chronic symptoms, combined with poor exercise tolerance and microcirculatory dysfunction that extended over a period of at least two years. [6]

For example, detection of B. henselae in horses has been associated with purpora hemorrhagica — the swelling of the blood vessels that usually occurs after strangles infection.

B. henselae has also been associated with arthropathy, a type of joint disease. [4]

In one case study, infection was identified in a three-month-old Thoroughbred colt with choloangiohepatitis, a severe liver condition. Once the attending veterinarians switched the colt’s antibiotic to a medication that targeted Bartonella bacteria, the colt’s condition began to improve. [8]

Another study examined tissues of an aborted equine fetus at approximately 240-270 days’ gestation. Researchers found vasculitis (inflammation of blood vessels) in multiple tissues as well as the presence of B. henselae.

This led the researchers to conclude that Bartonella infection can cause abortion in mares. [4]

Unfortunately, Bartonella infection can be difficult to recognize and diagnose in horses. Unlike other bacteria, Bartonella are immune-evasive and can infect a horse at extremely low levels of detection. [12][13]

Because little is known about how this disease affects horses, many veterinarians may not consider it or know how to test for it. However, polymerase chain reaction (PCR) and serologic tests are available to test for past or present infection.

PCR tests are designed to detect genetic material from a specific organism, such as viruses or bacteria, and can confirm present infection. However, PCR tests still may not be able to detect low levels of the bacteria. [2]

Collecting and testing blood samples on at least three days is usually necessary in order to get an accurate diagnosis.

Serologic tests can confirm the presence of antibodies produced in response to a bacteria or virus. Unfortunately, serologic tests are not useful in detecting current Bartonella infection in horses. They only show that a horse has previously been exposed to the bacteria.

The most effective way to detect an active infection involves a combination of culture and PCR tests. This is referred to as enrichment PCR or ePCR.

There is no single treatment that has been found effective for all forms of Bartonella infections. Instead, different antibiotics are recommended depending on specific symptoms that a horse may have and the infecting species of Bartonella. [3]

Several antibiotics and antimicrobial medications have been reported effective in treating Bartonella infection. In the previously mentioned study with the Thoroughbred colt, the antimicrobial minocycline appeared to clear up the infection affecting the colt’s liver. [8]

Other antibiotics that may be helpful include:

Antibiotics generally need to be given for a period of 4-6 weeks in order to be effective. However, the exact duration of treatment to resolve bartonellosis has not been established.

One study in humans evaluated fourteen different antibiotics and twenty-five antibiotic combinations against the stationary phase of B. henselae. The researchers found that ciprofofloxacin, gentamicin, and nitrofurantoin were the most effective, while clofazimine and miconazole were the least effective.

Many of these antibiotics are safe for use in horses, except for ciprofofloxacin which is not safe for horses. Your veterinarian can decide which antibiotic protocol is best to use with your horse.

Because of the possibility of antibiotic resistance, treatment is only recommended for animals showing clinical signs.

If your horse has bartonellosis, you can support their recovery by feeding a diet that provides all of the nutrients required for immune function and anti-inflammatory support.

Vitamins and minerals that play a key role in the immune system include:

These nutrients can be found in a comprehensive balanced vitamin and mineral supplement, such as Mad Barn’s Omneity. You can also support your horse’s immune system by feeding a diet that supplies adequate amino acids and omega-3 polyunsaturated fatty acids.

You can submit your horse’s diet for analysis online to help you identify any gaps in their current diet. Our nutritionists can also help you formulate a feeding plan that provides all of the nutrients required to support immune function.

Herbal medicines have a long history of documented use and have proven to be safe and effective in many circumstances. Researchers are looking into which herbal remedies may be of use with Bartonella infection.

Currently, there are no herbs or supplements that have been approved to prevent or treat Bartonella infection in horses.

One study evaluated the efficacy of three botanicals – C. sanguinolenta, J. nigra, and P. cuspidatum – on Bartonella hensalae in cell culture. The researchers found that these herbs were effective at slowing growth in a cell culture model. [10] However, it is unknown whether these herbs would have any effect when fed to an animal.

Antibiotics can have a detrimental effect on the microbiome of the gut and their use increases the risk of developing antibiotic resistance.

If your horse is treated with antibiotics, consider adding a digestive health supplement such as Optimum Digestive Health or Optimum Probiotic. These have a high level of beneficial probiotics to help maintain a healthy gut microbiome.

If you believe your horse may be affected by Bartonella infection, talk to your veterinarian about testing. You can also submit your horse’s diet for a free evaluation by our equine nutritionists to ensure their immune system is well supported. 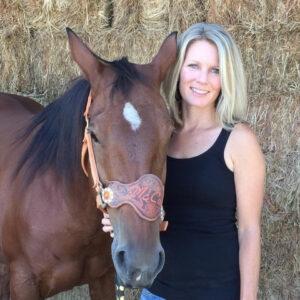 Casie Bazay has worked as a freelance writer specializing in horses for the past decade and is a young adult author as well. She is nationally certified in equine acupressure and has a great interest in holistic horse health and barefoot hoof care. Once a competitive barrel racer, Casie now enjoys giving back to the horses who have given her so much. She and her husband operate a hay farm in northeastern Oklahoma, and Casie's lifelong passion for horses serves as inspiration for her writing and keeps her constantly searching for new and better ways to care for her own two mares.
View More Posts

How to Feed a Horse on a Budget

De-Worming Your Horse: Best Schedule & Medications to Use

9 Science-Backed Benefits of Spirulina for Horses