Degenerative Suspensory Ligament Desmitis (DSLD) is a chronic condition in horses that affects connective tissue, including the suspensory ligament and other ligaments and tendons. This painful condition commonly leads to debilitating lameness.

In horses with DSLD, the suspensory ligament progressively weakens causing hyperextension of the fetlock, hock, and stifle.

The precise causes and mechanisms of DSLD are still an active area of research. Clinical studies are currently aimed at developing accurate, early diagnosis and improving treatment methods.

Research suggests DSLD is at least partially genetically inherited. It was first identified in Peruvian Paso horses and appears to follow family lines. In some families of Peruvian Pasos, it affects up to 40% of horses. [1] This condition has also been identified in Quarter horses, Warmbloods and Arabians. [2]

Unfortunately, there is currently no cure for DSLD and there are no reliable measures to slow disease progression. Supportive care including corrective shoeing, controlled exercise plans and pain relief can help lessen symptoms.

A well-balanced diet to support connective tissue health is recommended for all horses. This includes providing the necessary vitamins and minerals that are required for connective tissue remodelling during growth and repair of the tissue.

Ligaments are fibrous connective tissues that span between bones in the body, helping to stabilize them and supporting proper articulation of the joints. In horses, the top of the suspensory ligament attaches to the rear of the cannon bone and the pastern bone beneath.

At this point, the ligament separates into two strands surrounding the sesamoid bones. Think of the suspensory ligament as having an inverted Y shape. 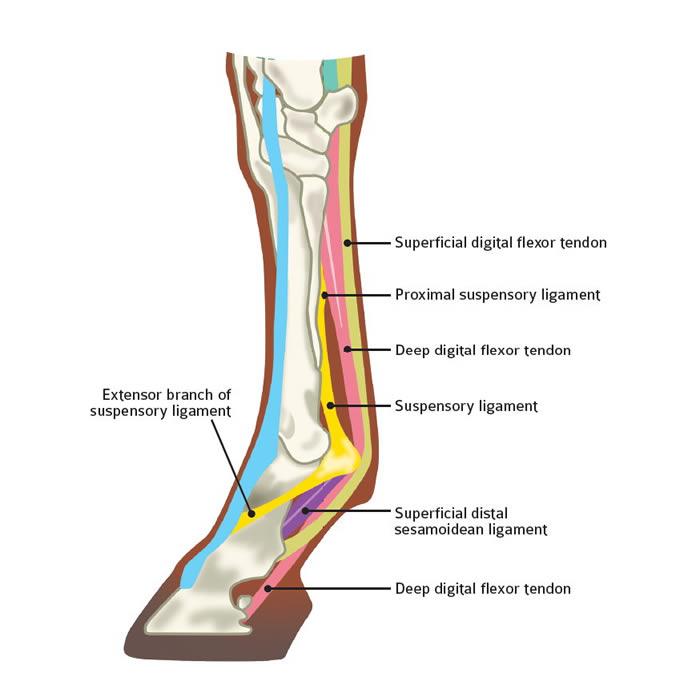 A common feature of Degenerative Suspensory Ligament Desmitis is an accumulation of proteoglycans in the space between cells making up the ligament.

Proteoglycans are naturally occurring glycosylated proteins found in connective tissue. They are made up of proteins bound to other molecules such as chondroitin sulfate.

These proteins are found outside of the cells and form the extracellular matrix. Proteoglycans help to provide structural support for cells in ligaments, but an excess of these proteins can actually weaken connective tissues.

In horses with DSLD, there is an excess accumulation of proteoglycans and they are of altered composition. This accumulation affects mobility of the joint, leading to progressive and painful lameness. [1]

Even someone unfamiliar with equines can spot a horse suffering from severe DSLD. In advanced cases, the fetlocks drop so much that it may look like the animal is walking on them.

DSLD was not recognized as a specific disorder until the late 20th century. Once considered an “old horse” disease, DSLD is now recognized as a connective tissue disorder affecting the entire body.

In 2006, researchers at the University of Georgia found that DSLD was not limited to the suspensory ligaments of affected equines. They determined it was a systemic disorder, “involving tissues and organs with significant connective tissue component“.

It is also referred to as Equine Systemic Proteoglycan Accumulation (ESPA) to reflect the systemic nature of this condition. [3]

Research is ongoing to identify how this accumulation of proteoglycans arises in the hopes of finding a biomarker of DSLD that can identify affected horses before symptoms appear. [2]

Early detection could help to implement treatment protocols to slow the progression of symptoms and assist in controlled breeding practices to avoid producing offspring with this genetic disorder.

The causes of DSLD are not fully understood. It is likely that there is a strong genetic component because the condition has been found at a high rate within specific family lines. [4]

Any horse can develop DSLD, but certain breeds are at increased risk, including: [1][2]

Horses of these breeds, in particular Peruvian Pasos, should be monitored for signs of DSLD.

Initial signs of DSLD are often subtle. It tends to affect more than one leg at a time; it may appear in both hind or forelegs, or all four legs.

There is generally no history of injury associated with DSLD. Over time, affected horses experience progressively worsening pain and lameness.

Lameness is often accompanied by heat and swelling in the fetlocks or noticeable enlargement of the joint. Gradually, the fetlocks start dropping toward the ground. The classic DSLD presentation also involves fetlocks that start resembling sweet potatoes (ie. fluid-filled and enlarged).

Signs of DSLD/ESPA may include:

Suspect possible DSLD if the horse starts digging holes in the pasture and stands with the toes pointing towards the hole. Affected horses may also assume a dog sitting position before getting up from laying down.

In addition to these classical symptoms indicative of pain or discomfort in the limbs, some horses may show other symptoms. Skin abnormalities such as loose skin and white hair spots have been observed. [5]

Many signs and symptoms of DSLD are also indicative of other issues such as colic or neurological problems such as equine protozoal myeloencephalitis (EPM) or West Nile Virus. This can make it difficult to diagnose DSLD and may result in misdiagnosis, particularly in the early stages.

In an advanced case, veterinarians can diagnose DSLD simply by observing the afflicted legs. Horses with DSLD have enlargement of the suspensory ligament which can be felt by palpation. If the horse is only mildly lame, then additional diagnostic techniques are necessary. [6]

The veterinarian performs flexion tests of the fetlocks. Failing such a test in two or more legs is indicative of DSLD. When the suspensory ligaments are palpated, they are hard and may feel lumpy. In some horses, the suspensories feel spongy.

Ultrasound imaging of a DSLD horse will show enlarged circumference of the medial and lateral suspensory branches. The veterinarian will look for collagen fiber tearing, fiber pattern irregularity, and calcifications on the ligaments.

DSLD is a progressive and incurable condition. However, with proper management, an affected horse may be able to live comfortably for a long time.

Some horses will stabilize and remain pain-free for a considerable period. Other horses may degenerate more rapidly and require euthanasia.

Keep in mind that horses with DSLD may have internal damage that is not obvious externally. Necropsy results show that cases in which damage appears confined only to the rear legs may actually affect all four legs and other tissues of the body. [3]

Whether to humanely euthanize a horse before its DSLD symptoms become severe is a decision between the owner and the veterinarian.

There is currently no way to prevent or slow the progression of Degenerative Suspensory Ligament Desmitis.

Genetic testing is the current focus of research to identify horses at increased risk of developing DSLD. Breeding of horses with a known family history of DSLD should be avoided wherever possible to prevent passing on this condition.

Your vet may be able to perform a basic assessment of ligament health as part of the pre-purchase exam. Inquire about this especially when purchasing a horse from a commonly affected breed such as Peruvian Paso or Paso Fino.

While responsible breeders would not breed animals known to pass on DSLD, the late onset of DSLD in most cases means that breeders may have no awareness of the issue in their breeding stock. Horses may not become symptomatic until past their reproductive years.

Therapeutic shoeing can help support the affected limbs of a horse with DSLD. It is recommended to find a farrier experienced in trimming and shoeing DSLD horses.

Eggbar shoes or shoes with extended heels can provide fetlock support. When DSLD is diagnosed at an advanced stage, high wedge heels can offer relief. If the horse begins to feel better, the height of the wedge is gradually brought back to normal.

We recommend consulting with a farrier who has experience with DSLD. Anecdotal reports suggest keeping your horse barefoot with correct trimming can be more effective for decreasing loading stress on compromised connective tissue.

Palliative care for DSLD may include:

The use of non-steroidal anti-inflammatories (NSAIDs) such as firocoxib, marketed under the brand name Equioxx, may help with pain management. Phenylbutazone, also known as “bute”, is an NSAID that may help with initial pain control.

However, long-term use of bute can result in damage to the gastrointestinal tract such as gastric and hindgut ulcers. Short-treat use is preferable unless your veterinarian advises otherwise.

Support boots may provide benefits, but limit their use to 12 hours per day.

Horses diagnosed with DSLD do not benefit from prolonged stall rest. Although horses with DSLD should not be ridden, they can benefit from regular, light exercise. Try to keep them turned out as much as possible. Movement reduces stiffness and can decrease lameness. [7]

As a degenerative and progressive condition, DSLD can be challenging to manage. The prognosis is poor as there is currently no treatment.

Instead, management is based on decreasing pain and providing nutritional support for connective tissue health. Unfortunately, pain is often difficult to manage in advanced cases leading to the difficult decision of euthanasia as a humane endpoint.

Nutritional Support for the DSLD Horse

Horses with DSLD will benefit from a feeding plan that ensures nutrient requirements for connective tissue health are met and that supports anti-inflammatory processes.

Instead, meet your horse’s caloric needs with highly digestible fibre sources such as molasses-free beet pulp or soy hulls. Feeding dietary oils is another way to increase the calorie density of the diet without impairing gut health.

Other supplements that could support joint health include MSM (methylsulfonylmethane) , which is a readily available form of sulfur that is important for connective tissue structure and flexibility.

According to anecdotal veterinary case reports, MSM helps to improve the comfort and mobility of horses with DSLD.

Jiaogulan, a Chinese herb with properties similar to ginseng, has long been used medicinally in Asia. It may be beneficial in horses with DSLD by supporting circulation and acting as an antioxidant.

Meeting your horse’s mineral and vitamin needs to support connective tissue is critical when it pertains to DSLD. Consider Omneity which contains antioxidants such as selenium, zinc, copper, vitamin E and vitamin C.

It also provides a full profile of B-vitamins and other nutrients to target the needs of horses based on the National Research Council’s Nutrient Requirements of Horses.

For individualized dietary recommendations for your horse with DSLD, submit your horse’s information online for analysis by our equine nutritionists. Jane Meggitt is a horse owner who passionately researches equine health and nutrition to keep her horses in the best shape possible. A graduate of New York University, Jane's work has appeared in various publications, including Hoof Beats, The Chronicle of the Horse, Horse News, and Above the Rail.
View More Posts

Welcome to the Hoof Health Blog

Amino Acid Requirements for Horses: When to Feed More Protein?

Top 17 Risk Factors for Laminitis in Horses [+ How to Prevent]

8 Common Stereotypic Behaviours in Horses & What They Mean [LIST]