Lameness in the horse’s stifle joint can result in shortened stride length, reluctance to work or a rough canter. While lameness is more commonly attributed to problems with the hock joint, stifle lameness is seen frequently in performance horses.

The stifle is considered the most complex joint in the horse’s body with a similar function to the human knee. Stifle injuries can result from repetitive stress, trauma, excessive use, changes in direction and rapid deceleration. Horses engaged in jumping and barrel racing are most at risk of these injuries.

Stifle lameness does not always mean the end of a horse’s athletic career, although it may mean the animal will never again perform at its previous level. The good news is that diagnosis and treatment of stifle lameness have improved significantly in recent years. [1]

Advancements in imaging technology have made a significant difference in the ability of veterinarians to make accurate diagnoses of what formerly may have been deemed an “unknown” lameness.

Prevention of stifle lameness and other stifle injuries starts with ensuring your horse is not overworked and supporting overall joint health. It is important to keep excess weight off of your horse and to be vigilant for any signs of over-use.

The stifle is one of the most complicated parts of the equine body. The stifle is designed for flexion and extension of the hind leg.

The stifle is the largest joint in the horse’s body and the site where the femur meets the tibia in the hind end.  The former is the long bone between the hip joint and the stifle, while the latter is the bone running between the stifle and hock.

Also involved in the stifle joint is the patella, or kneecap, situated on the femur’s lower end. This small, flat, round bone is located in the thigh’s quadriceps muscle.

The patella sits in the trochlear groove on the femur. From this groove, it slides up and down as the rear leg moves.  The patella’s movement lets the joint move like a hinge. The leg is able to extend and flex, but it cannot move sideways. 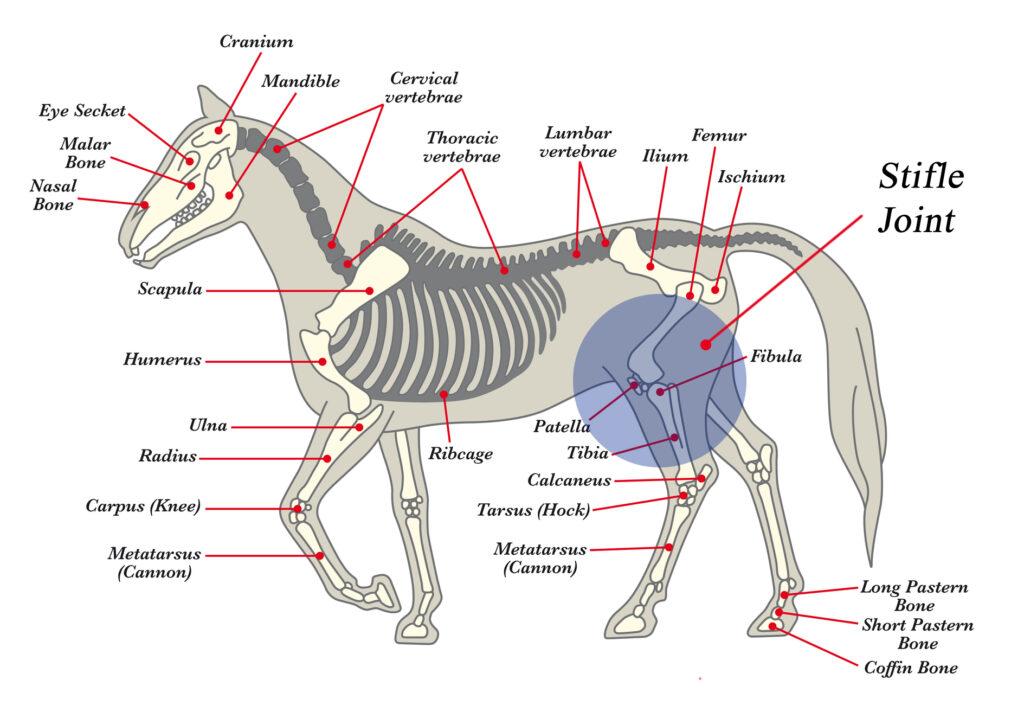 Three shock-absorbing joints are involved with these bones:

On the outside edges of the joint, the short, thick, medial and lateral collateral ligaments join the femur and tibia bones. Deep within the cleft area are the anterior and posterior cruciate ligaments (ACL and PCL).  These ligaments aid in joint stabilization.

In total, 14 ligaments hold the joints together. There are also the two menisci, discs cushioning the femur and tibia.

The stifle is the equivalent of the human knee. However, when people stand still, their knees are upright. The equine “knee” is angled.

Although anterior or cranial cruciate ligament ruptures are common injuries in human and dog knees, this injury seldom occurs in horses.

In people, just one patellar ligament comes off the kneecap. Equines have three such ligaments.  If a horse does suffer a severe cruciate ligament rupture, options for the animal are limited.

With such a complex joint, it is unsurprising that there is a considerable range to stifle lameness. [2]

For instance, intermittent upward fixation of the patella frequently afflicts young horses. The condition is sometimes referred to as “sticky stifles” or “catchy stifles”. In some pony breeds, this is an inherited condition.

The stifle has a locking joint that allows the horse to stand while sleeping. That is a normal process. A sticky stifle means that this mechanism is keeping the leg in a locked position.

In many cases, regular exercise can strengthen muscle and ligament tone sufficiently to prevent the hitchiness inherent in upward fixation of the patella.

Signs and Symptoms of Stifle Lameness

Initially, signs of stifle lameness are often subtle. Horses may seem off when taken out of their stalls, but get better as they continue working. A long period of stall rest and subsequent loss of muscle and ligament tone may exacerbate the problem.

Reluctance to work may prove an early indicator of a stifle issue. Other signs of weak stifles in horses include:

A sore back or croup often accompanies stifle lameness. If your horse seems sensitive when these areas are groomed or when saddled, suspect a possible stifle issue.

Because minor stifle weakness or lameness is hard to pinpoint, especially if the stifle is not swollen, identifying the underlying problem often involves a process of elimination.

Clicking noises may emanate from some horses’ stifles. Although alarming, the noise itself may not indicate a serious stifle issue. However, the clicking can mean a rupture of the cartilage or ligaments of the joints. In such cases, the horse is severely lame.

The stifle is a complex joint and there are many different causes that can lead to stifle lameness. The most common include:

Stifle injuries are more common in certain disciplines. These include:

Basically, any activity in which a horse makes sudden stops, changes direction quickly, or travels at speed can increase the odds of a stifle lameness.

Disciplines such as dressage, which at the higher levels require upper body rotation and bending, can increase the risk of a stifle injury.

Horses with straight hind limbs are more prone to stifle lameness. So are equines whose hooves have low heels and long toes.

An acute stifle injury will generally have swelling associated with it. The veterinarian will check for swelling and perform a flexion test.

After viewing the horse moving in hand or under saddle, the vet will block the three joints if a stifle injury is suspected. All three joints are usually blocked at once to narrow down a lameness in that area.

If the horse is sound after blocking, the next stage is using radiographs and ultrasound to examine the stifle. These imaging technologies are generally used in conjunction, as certain areas of the stifle are better viewed via X-ray and others with ultrasound.

X-rays should reveal the existence of arthritis, bone cysts, or fractures. Ultrasound will show ligament or muscle injury.

Horses with a mild stifle lameness may respond to rest, the use of non-steroidal anti-inflammatory drugs (NSAIDs), or injections of a corticosteroid and hyaluronic acid to battle inflammation.

The vet will discuss a timeframe after the rest period for resuming work with the focus on building conditioning.

Candidates for arthroscopic surgery are those for whom soft tissue abnormalities have been ruled out. This minimally invasive procedure is a useful tool for both diagnostic and therapeutic purposes.

This once common surgery in which the medial patellar ligament is severed is not used frequently today, but it is an option when horses do not respond to more conservative treatments.

In some horses, corrective shoeing can eradicate stifle locking problems. The farrier either trims the inside wall or applies a lateral heel wedge to encourage hoof rotation. [5]

This hormone, in the form of estradiol cypionate, is injected into the stifle to increase ligament tension, including the distal patellar ligament tone.

This natural anti-inflammatory, derived from the horse’s blood, is injected into the affected joint.

PRP is used to promote healing in soft tissue injuries. The horse’s blood is harvested and the PRP removed in a centrifuge.

It is then injected into the horse via ultrasound guidance. One benefit of PRP therapy is that there is no potential for allergic reaction, as the horse’s own blood is used.

The vet obtains stem cells from the animal’s fat or bone marrow and injects them into the joint. A study published in the March 2014 edition of Veterinary Surgery looked at the efficacy of this treatment.

The study consisted of 33 horses, 24 of which had meniscal damage. Previous studies using arthroscopy alone had no more than 63 percent of horses returning to work.

The study concluded that BMSC administration was safe and that some horses could return to work with BMSC treatment alone in lieu of arthroscopy.

In the study published in Veterinary Surgery, researchers performed a two-year follow-up on 82 Western performance horses that had undergone arthroscopic stifle surgery.

Thirty-two, or 40 percent, of the horses had returned to their intended use. The disciplines included cutting, Western pleasure, and reining.

Factors affecting the likelihood of a horse to return to its intended use include:

Horses whose radiographs show severe change are less likely to return to their intended use. When making a decision regarding stifle surgery, owners must take these factors into consideration.

For many horses with stifle lameness, a cure is unlikely. What the horse owner can hope for is successful symptom management.

Successful management may preclude a horse from competing at its former level, but that does not mean the animal cannot have a useful life in a less demanding job.

The good news is that more treatment options are available than ever before, with additional therapies in the pipeline.

The adage, “An ounce of prevention is always worth a pound of cure,” was probably not coined for horses,  but it is apropos.

Stifle lameness is not always preventable, but there are ways to keep this critical joint in top condition. [7]

There are many different factors that affect joint health and your horse’s feeding program is an important one. The right diet will keep your horse at a healthy body weight, prevent excessive inflammation and support injury healing.

If your horse is affected by stifle lameness or other injuries or joint problems, submit their diet for analysis online and Mad Barn’s equine nutritionists can help you with personalized recommendations.

You should also read our article on the Top 8 Principles for Joint Health in Horses.

Nutritional supplements can play a role in helping to support your horse’s joint function and mobility. A joint supplement is not necessarily going to reverse the problem but may improve comfort, help to reduce inflammation or support the health of connective tissue.

There are several common ingredients used in joint supplements with efficacy and safety supported by clinical research. These supplements include methyl-sulfonate-methane (MSM), hyaluronic acid, and omega-3 fatty acids.

Other supplements like avocado/soybean unsaponifiables, resveratrol and green-lipped mussels have preliminary data suggesting they may work, but require further study. Jane Meggitt is a horse owner who passionately researches equine health and nutrition to keep her horses in the best shape possible. A graduate of New York University, Jane's work has appeared in various publications, including Hoof Beats, The Chronicle of the Horse, Horse News, and Above the Rail.
View More Posts

Pasture-Associated Laminitis: How to Keep your Horse Safe

Why is My Horse’s Appetite Decreasing or Increasing? [Top Reasons]

Hoof Abscess: A Common Cause of Acute Lameness in Horses