What is Choke in Horses? [Signs, Treatment & Prevention] Equine choke refers to an obstruction of the horse’s esophagus and is a medical condition necessitating urgent attention. The condition most frequently occurs due to rapid feed consumption and the subsequent lodging of feed or other matter in the esophagus.

Choke can occur in horses of any age or breed. Risk factors for choke include poor teeth, feeding unsoaked food pellets or large pieces of vegetables, and growths in or deformities of the esophagus.

A veterinarian will diagnose choke based on multiple clinical symptoms, including saliva and feed discharge from the nostrils and mouth. Endoscopy is useful for observing the esophagus and any blockages in the organ.

Treatment of equine choke may require veterinary care, including flushing the esophagus and administering medications that relax the musculature of the esophageal structure. In rare cases, surgery may be necessary.

For horses with a history of choke, modifying the diet to slow down their consumption and soaking the feed can help prevent future incidences.

What is Choke in Horses?

A relatively common condition, equine choke occurs when the esophagus becomes partially or fully blocked by food or a foreign body. [1]

The esophagus is a muscular tube that enables the transfer of food from the mouth to the stomach.

Choke in horses is different than choking in humans, which occurs when something becomes lodged in the airway (trachea) and prevents normal breathing.

Horses can breathe when choke occurs because their airway is not obstructed. However, choke is still a medical emergency because it can result in life-threatening complications including pneumonia and esophageal rupture.

Choke commonly occurs when horses eat concentrated feeds (such as grains) too quickly without chewing properly. If a feed hasn’t been adequately hydrated with saliva, it can form a bolus that becomes trapped in the esophagus.

Non-food materials such as fecal matter and hairballs can also cause choke.

While choke can occur in any horse, ponies and senior horses may be more prone to the condition. [12]

Aggressive eaters and horses with poor teeth may be at increased risk of choke if they consume large amounts of feed too quickly.

Secondary choke occurs due to a structural deformity in the esophagus. It can also occur due to a neurological dysfunction that interferes with peristalsis (the transport of food) through the organ.

The signs of choke are usually obvious, although some cases of the condition may go unnoticed. Signs of choke typically occur soon after the esophagus has become blocked.

Common signs of choke include:

If choke is not resolved promptly, complications can result and lead to long-term health problems.

Esophageal Rupture: A life-threatening complication of choke, esophageal rupture may result from the obstruction itself or attempts to dislodge the obstruction. If the esophagus ruptures, death may occur due to septic shock.

Aspiration Pneumonia: While experiencing choke, some horses may breathe in (aspirate) fluid or food into their trachea. If the fluid or food particles move into the lungs, an infection can occur. Signs of aspiration pneumonia typically occur within 24-48 hours of choke.

A study of 34 horses found that the duration of esophageal obstruction before admission to a veterinary clinic was significantly longer in horses that developed aspiration pneumonia compared to those that did not. [2]

Upon evaluation of 109 horses with esophageal obstruction, those with an increased respiratory rate and moderate to severe tracheal contamination had an increased risk of developing aspiration pneumonia. [3]

Esophageal Scarring: Scar tissue can develop if the esophagus becomes damaged to the extent of ulceration during an episode of choke. If enough scar tissue forms, it can reduce the internal diameter of the esophagus and increase the risk of future episodes of choke.

Choke can occur in any horse, but is more likely in horses consuming certain types of dry commercial feeds and in horses with dental issues. Certain medical conditions can also increase the risk of developing equine choke.

The most common cause of equine choke is rapid feed consumption without adequate chewing. Course and dry foods can cause choke because they are more likely to lodge in the esophagus than softened and moist foods.

Dry feeds such as beet pulp, pellets, and hay cubes can swell quickly once they are chewed, causing them to lodge in the esophagus. Large pieces of carrots or apples can also occlude the esophagus.

Foals with undeveloped teeth may be at risk of choke if given dry, coarse hay or straw.

Older horses with dental pain and fractured or missing teeth may be unable to properly move their jaw to chew their feed adequately, increasing their risk of choke.

Drugs used to sedate your horse reduce the normal muscle movement within the esophagus, leading to an increased risk of choke. These medications should only be used under veterinarian supervision.

Choke can occur due to any medical condition that interferes with the ability to swallow.

Prompt diagnosis and treatment of equine choke reduce the risk of complications.

A veterinarian can make a diagnosis of choke by physically examining the horse. This helps determine where the blockage has occurred and how dense it is.

It may be necessary for the vet to conduct an endoscopy to evaluate the obstruction by inserting a tube into the nostril and passing it into the esophagus. Failure to pass all the way to the stomach indicates there is an obstruction in the esophagus.

The veterinarian may also use x-rays to determine the location of the obstruction within the esophagus.

Although some cases of choke resolve on their own, you should always consult a veterinarian to confirm the diagnosis and ensure the condition has fully resolved.

Choke can sometimes resolve on its own without treatment. Affected horses continue to produce saliva that lubricates the esophagus. Eventually, the obstruction may pass into the stomach without further intervention.

However, some obstructions can last for several hours or even days, increasing the risk of complications and dehydration. [11] Your veterinarian will decide which treatment is most appropriate for your horse.

Your veterinarian may decide to administer a sedative or an antispasmodic injection to encourage the esophagus muscles to relax.

The antispasmodic medication N-butylscopolammonium bromide (Buscopan) is considered an effective treatment for simple choke. It works by relaxing smooth muscles found in the lower third of the esophagus. [11]

The analgesic and antispasmodic medication metamizol can also be given. This acts as a pain killer, muscle relaxant and antipyretic (fever relief).

Oxytocin has also been used to treat the condition by reducing the tone of the esophageal musculature. [8]

Esophageal flushing involves gently irrigating the esophagus with water or another lubricating substance to encourage the obstruction to move into the stomach.

Your veterinarian must complete this procedure slowly and carefully to avoid injuring or rupturing the organ.

The procedure requires inserting a stomach tube into a nostril and down the esophagus to flush water through it while the affected horse is under sedation.

Esophageal flushing is done with the head of the horse positioned below the esophagus to prevent the flushed matter from entering the lungs.

In severe cases of choke, surgery may be used as a last resort to resolve the condition. Surgical intervention is not usually necessary but may be required if no other treatments have worked.

An esophagostomy is a surgical procedure that involves creating an incision in the esophagus to facilitate the removal of an obstruction. [6]

After the obstruction has been cleared, your horse should be carefully monitored for signs of pain, distress or infection.

Your horse’s diet should be modified to provide feed that is easy to chew and swallow. Unsoaked pelleted feeds, dry grains and rough forages should be avoided.

Feeding: After an obstruction is cleared from the esophagus, horses should be fed grass or feeds in the form of a soaked mash for several days to allow the esophagus to heal.

This will help to avoid irritation of the esophagus and prevent choke from recurring. Soft and moistened feeds are ideal for horses to eat while esophageal swelling subsides.

Antibiotics: Your veterinarian may prescribe antibiotics to help prevent infection in the throat or lungs if aspiration of food or fluid has occurred.

Observe your horse for depression and reduced feed intake as these signs may indicate she is ill. Have your vet examine your horse if you are unsure if she is recovering well.

How to Prevent Equine Choke

Choke can happen to any horse anytime food or other substances are consumed. Consider taking the following precautions to help prevent the condition.

If your horse has experienced choke in the past, consult with an equine nutritionist to develop a feeding plan to help prevent future episodes of choke. 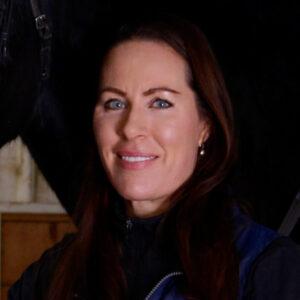 Jaime Thomas is a graduate of the University of Calgary and has extensive experience working in the nutraceutical industry as a researcher and writer. She is a dedicated horse owner who enjoys staying current with advances in the equine health and nutrition field to better serve the horses she cares for and interacts with.
View More Posts

Rain Scald in Horses: A Common Bacterial Infection of the Skin

What is a Healthy Hoof?